In the 25 most frequently taken college-level community-college classes in one state system, students who had not completed a degree in the system within three to five years were 10 times as likely to have failed, on average, as were students who did complete a degree during that time period. 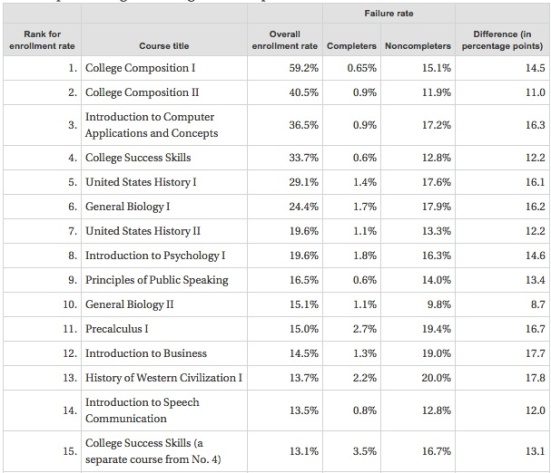 Note: Data are drawn from an analysis of the transcripts of nearly 73,000 credential-seeking community-college students who entered college in a single state system between 2004 and 2006. Of those students, 19.2 percent completed a certificate or degree from a community college in the system by 2009. Some students who are counted as noncompleters may have transferred and finished their degrees outside the system. Figures are rounded, but calculations were done using unrounded figures. The average of failure rates is an unweighted average.

Source: Community College Research Center, Teachers College, Columbia U.
For more information check out Students in the Almanac of Higher Education 2013 via The Chronicle of Higher Ed.

Diverse: Issues in HE

Articles found on this blog are gathered from a number of websites and RSS feeds. Because many articles include links to news sources, they may become inactive after a time. Additionally, some links may require subscription (free or paid) in order to read the full article.